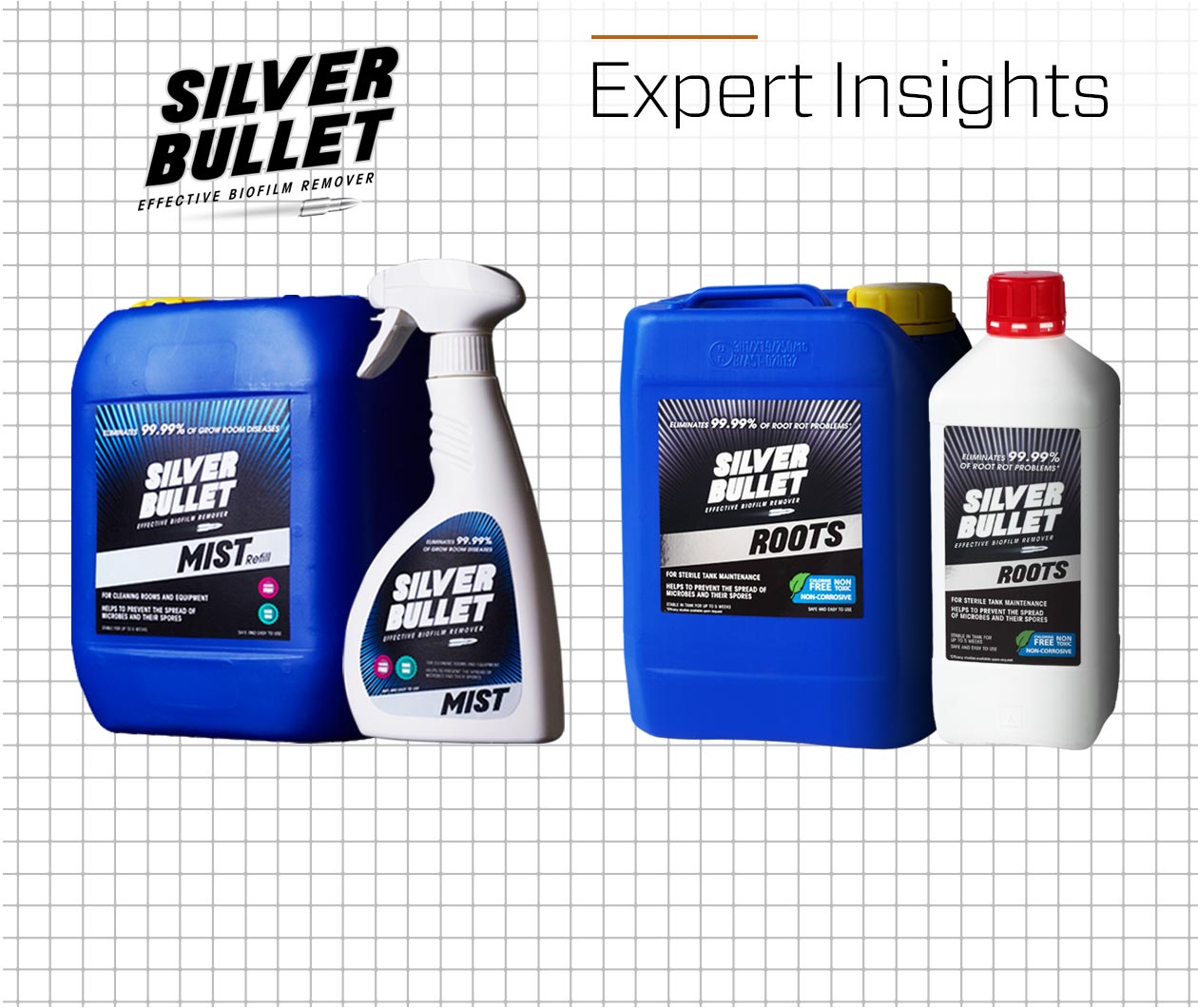 Silver Bullet Roots and Silver Bullet Mist are tailored to take on a whole host of diseases with the minimum amount of effort on your part.

Micro-organisms have had millennia to master the art of being properly sneaky bastards. Your system doesn’t have to be swimming in slime or smelling decidedly off to be home to predatory bacteria; sometimes stunted plants are the only sign you’ll get that anything is off and by then you’ll probably be weeks into a now wasted grow.

Before you go throwing out your kit though, try giving it a good clean- or better yet, get ahead of the problems before they happen.

Soap and water just aren’t going to cut it and bleach may destroy the helpful micro-organisms that your plants depend on; Silver Bullet is designed to strike the perfect balance between the two.

Just a small dose is lethal to Pythium, Botrytis, Fusarium, biofilm, bacteria, fungi, mould and many others. Four to six millilitres per ten litres (4-6ml/10L) of Silver Bullet Roots added to your tank every time you change it is enough to shore up your system against most root diseases and avoid cross-contamination in recirculating systems; that’s all it takes!

So how does it work?

In short, the silver helps the hydrogen peroxide to last longer and kill micro-organisms faster

Used in everything from hair bleach to denture soak, hydrogen peroxide (H2O2) is the basis of many cleaning product, Silver Bullet included. Hydrogen peroxide is thermodynamically unstable; this is the key to how it works.

So what separates Silver Bullet from all the other hydrogen peroxide products on the market? The clue is in the name…

Cells have long since developed defences against breaking down; Catalase, found in nearly all living beings, is the primary enzyme that protects cells from oxidative damage. Higher doses of hydrogen peroxide or extended exposure can overcome these enzymes, but Silver Bullet uses a far more effective method of breaking down catalase; using the catalyst silver nitrate.

Simon, from Silver Bullet gave us an explanation;

“What is so unique about Silver Bullet is that the silver inhibits these enzymes. This means the ‘active oxygen’ species can cross the membrane much easier to oxidise and physically eliminate the micro-organisms.”

In short, the silver helps the hydrogen peroxide to last longer and kill micro-organisms faster. The stability of Silver Bullet Roots gives it less than half the running costs versus standard hydrogen peroxide which will need dosing daily to remain effective. The chances of you or your plants accidentally overdosing on it are virtually nil – good luck trying!

Silver Bullet Roots is added straight to your tank every time you change it (yes, that’s it) improving water quality by acting as a disinfectant and increasing oxygen available to your plants’ roots.

Silver Bullet Mist is slightly stronger than Silver Bullet Roots; it is used to sterilise and disinfect hard surfaces. Use it between grows to give a good going over to your grow room, system, tools, work surfaces and even the bottom of your shoes.

On their website you’ll find a number of test cases with some great photo evidence of just how effective Silver Bullet can be.

Wholesale distribution in the UK via NutricultureDGS and Creation Wholesale.

Available from partner stores listed below.