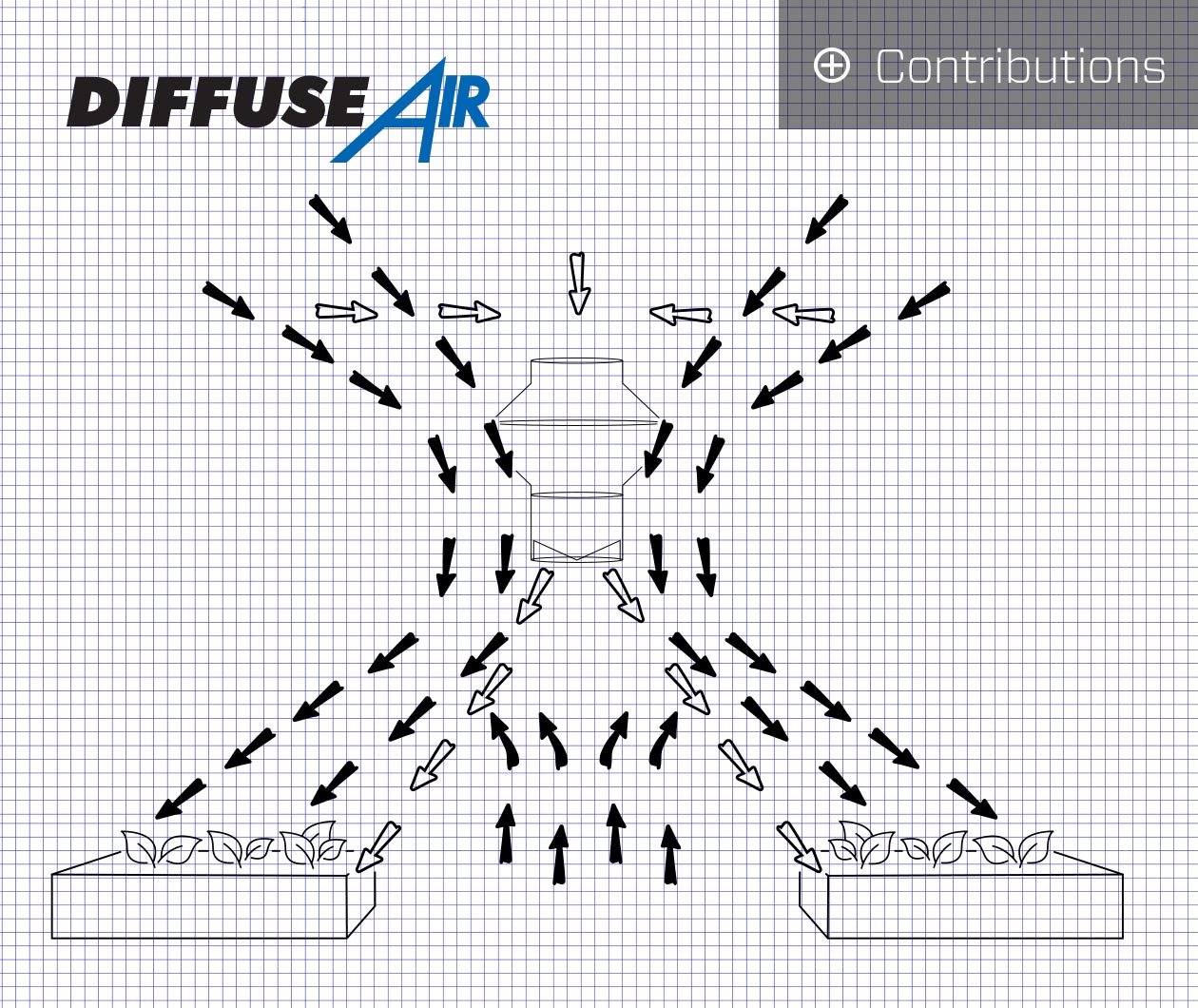 By Cosmo MacKenzie • 5 years Ago

The past few weeks have seen the DiffuseAir storm the market. We’ve covered the obvious advantages it has in our introductory article; freeing up space previously used by oscillating fans, eliminating hot spots and micro-climates and reducing the problems caused by harsh air streams. In this article Global Air Supplies explores what the DiffuseAir does in more detail;

What looks like a very basic design in fact relies on impressive engineering to create an incredibly efficient system.

Systemair’s existing diffuser products were designed to diffuse air throughout a variety of environments, but they all relied on physical surfaces like ceiling to help move and diffuse the air.

Creating a standalone system provided a unique engineering challenge. The engineers soon realised they could take advantage of the way the air comes out of the RVK fan.

This difference in speed from the centre of the airflow and the sides is what’s known as the velocity profile. The side vents are the perfect size to create a jet of air, the key to this jet is its low volume but high velocity. 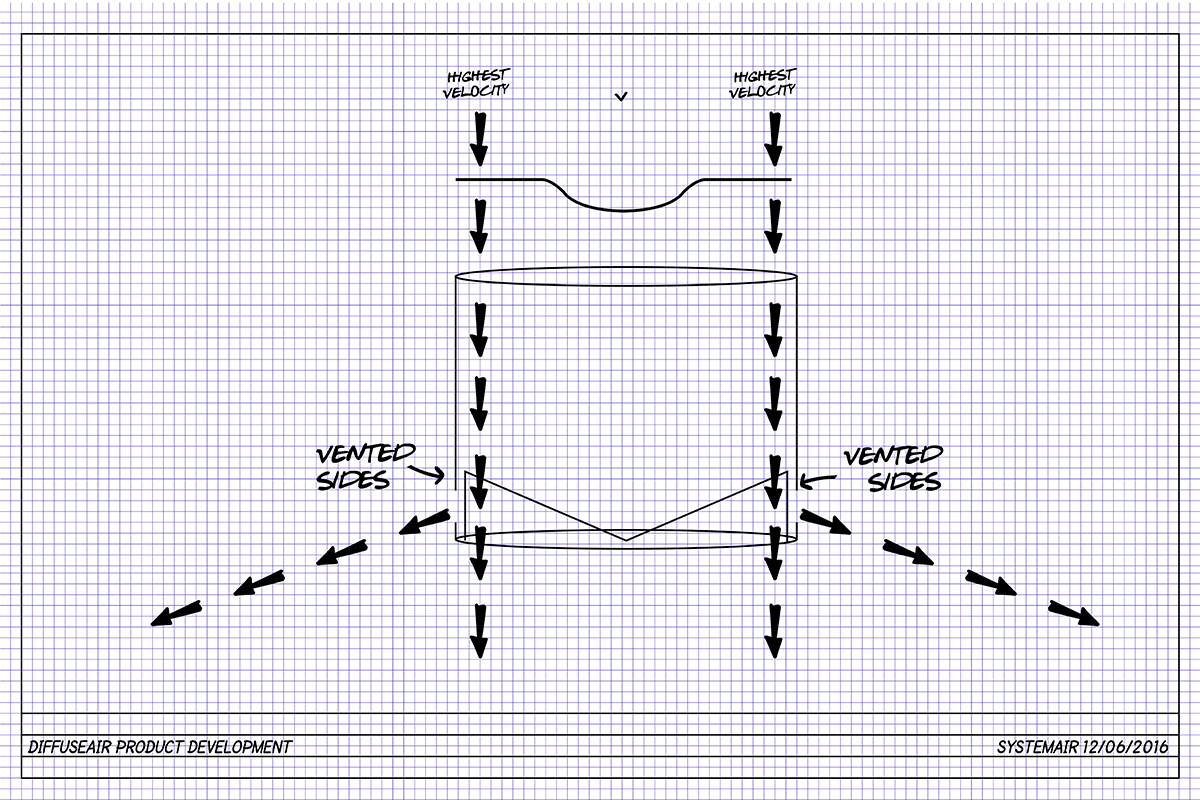 This jet of air shoots out of the vents and away from the unit at high speed, before gradually slowing down to below terminal velocity and eventually turning back on itself. This circulating air flow creates an area of low pressure around the sides of the unit.

The lower pressures air from fins comes out of the diffuser and attaches to the higher pressure jets, and the jets pull the air vertically downwards toward the grow area. 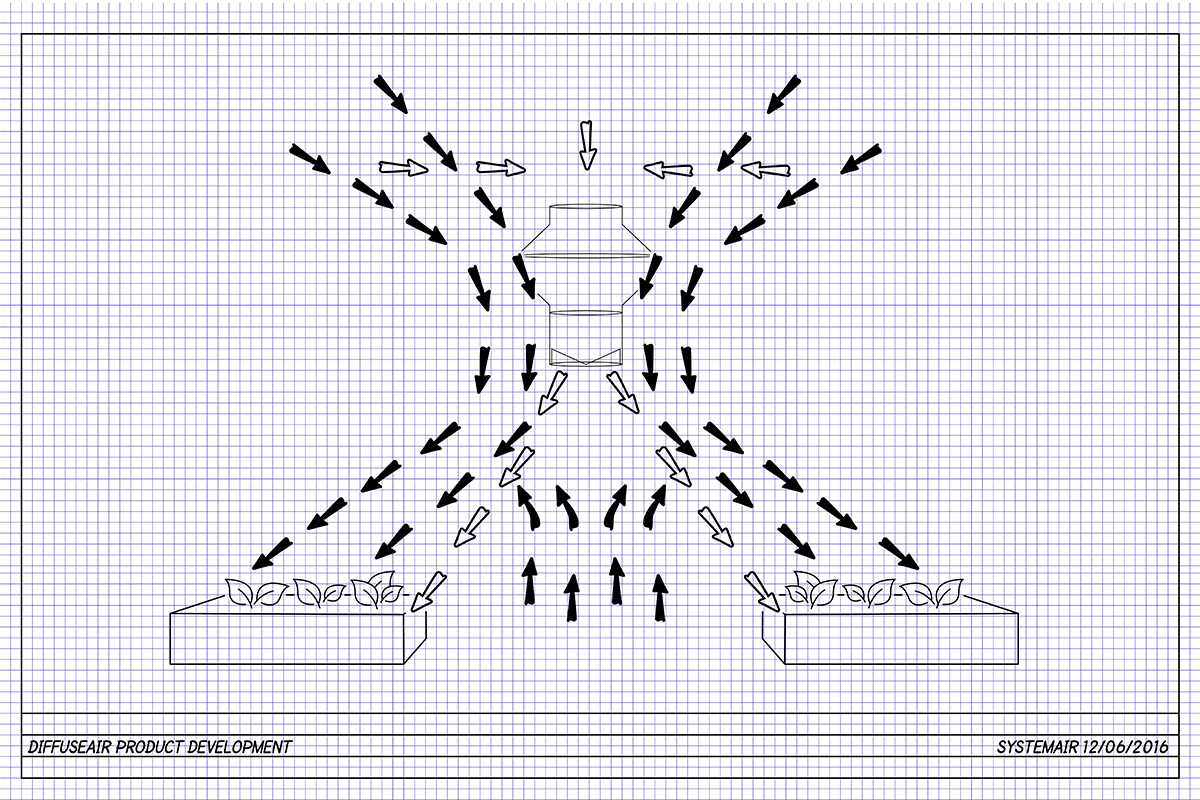 These secondary airflows either side of the jets are slower moving, but of greater volume. The whole aerodynamic system optimises the energy of the fan creating a highly efficient well mixed air pattern within the growroom. With the DiffuseAir, a uniform environment can be achieved in a short period of time.

We have applied the same simple and efficient design philosophy to the product packaging. Every box shows exactly what the DiffuseAir does. Inside the box you’ll find everything you need to mount the unit onto a fan and instructions on how to do so (The DiffuseAir is designed to be used with RVK fan profiles, but it can still be used with other fans too).

It’s a bold, minimalist approach that really highlights just how confident we are about this product; All the DiffuseAir data is available online, but you really need to try this innovative product yourself to experience just how good the DiffuseAir really is.

Exclusively distributed in the UK by Global Air Supplies

The DiffuseAir is available in partner stores;